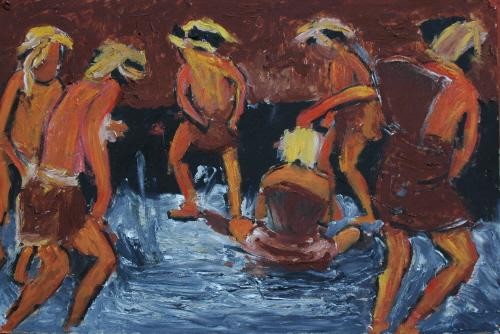 The Kaumaakonga band is consist of young people from the most western Polynesian islands of Rennell and Bellona in the southern part of Solomon Islands. The band was formed in 2000 with hopes and aspirations to revive and promote the original chants and island rhythms of our culture which is deteriorating in this present age. The band was formed by group of young people who were victimized during the ethnic tension in the Solomon Islands in early 2000 and resulted in a massive number of unemployed youths in our communities (Rennell Beloona). The primary idea of forming this band was, and will always be to engage young people in the music industry. Kaumaakonga is a world music band that specializes in a contemporary island style. Our rhythms and melodies are based of rare, traditional styles of music that have evolved in our Polynesian society for generations. Kaumaakonga launched their first ever recorded album in 2004 and has been continuously releasing single hits since then. These singles have been very popular in the Solomon Islands. This success encouraged the band to pursue of the idea of promoting culture through great music.

Warning: Invalid argument supplied for foreach() in /nfs/c06/h05/mnt/156706/domains/musicbridgesconnect.org/html/wp-content/themes/music-bridges/user-profile.php on line 84

Send Newsletters to your fans from ReverbNation.com